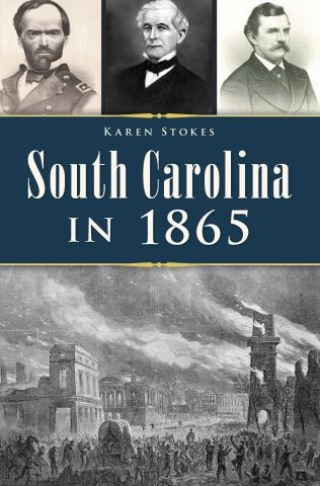 The year 1865 brought an end to the war in America, but it also ended a civilization that had existed for nearly two centuries in South Carolina. Plantations, churches, farms, factories and whole villages and towns were pillaged and burned by General William T. Sherman's army, and a once thriving and wealthy state was reduced to poverty. While Columbia burned, besieging Union troops swept in and occupied the undefended city of Charleston, which Sherman called "a mere desolated wreck," and then launched raids into the surrounding countryside, including the rich plantation lands of Berkeley County. The surviving records of this period are numerous and revealing, and author Karen Stokes presents many of the eyewitness accounts and memoirs of those who lived through it.

Karen Stokes: Karen Stokes has been an archivist at the South Carolina Historical Society in Charleston for more than twenty-five years. Her special area of interest is the Confederate period, and she has authored and edited numerous books and articles on the subject, including three History Press publications, South Carolina Civilians in Sherman's Path (2012), The Immortal 600: Surviving Civil War Charleston and Savannah (2013) and Confederate South Carolina: True Stories of Civilians, Soldiers and the War (2015). Her most recent scholarly books, published by Mercer University Press, are An Everlasting Circle: Letters of the Haskell Family of Abbeville, South Carolina, 1861-1865 (2019), and Incidents in the Life of Cecilia Lawton: A Memoir of Plantation Life, War, and Reconstruction in Georgia and South Carolina (2021).