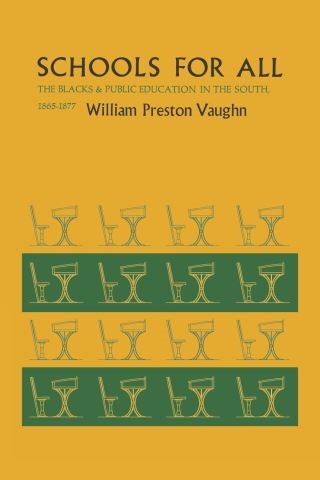 Schools for All provides the first in-depth study of black education in Southern public schools and universities during the twelve-year Reconstruction period which followed the Civil War. In the antebellum South, the teaching of African Americans was sporadic and usually in contravention to state laws. During the war, Northern religious and philanthropic organizations initiated efforts to educate slaves. The army, and later the Freedmen's Bureau, became actively involved in freed-men's education. By 1870, however, a shortage of funds for the work forced the bureau to cease its work, at which time the states took over control of the African American schools.

In an extensive study of records from the period, William Preston Vaughn traces the development—the successes as well as the failures—of the early attempts of the states to promote education for African Americans and in some instances to establish integration. While public schools in the South were not an innovation of Reconstruction, their revitalization and provision to both races were among the most important achievements of the period, despite the pressure from whites in most areas which forced the establishment of segregated education.

Despite the ultimate failure to establish an integrated public school system anywhere in the South, many positive achievements were attained. Although the idealism of the political Reconstructionists fell short of its immediate goals in the realm of public education, precedents were established for integrated schools, and the constitutional revisions achieved through the Fourteenth and Fifteenth amendments laid the groundwork for subsequent successful assaults on segregated education.