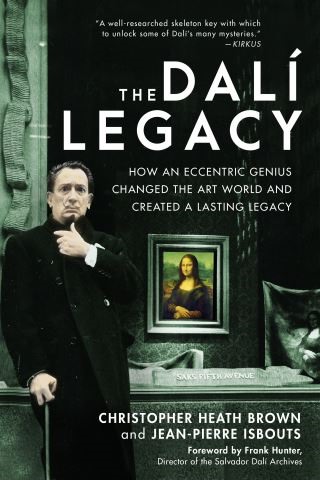 Proven author track record, perfect author pairing, and plans for events and media on the West Coast and in the southeast: Jean-Pierre Isbouts's previous books have sold more than 2 million copies with over 77,000 copies accounted for in BookScan, and Christopher Brown is the owner of a collection of original Dalí art and an expert on his style, making them the perfect pairing to create this book. Having one author in California and one in North Carolina means there will be signings, gallery tie-ins, and media in and around both states.

A must-have to complete an art lover's collection, and a great gift: With brilliant, enlightening text and more than 150 four-color images throughout, this book is a stunning and immersive keepsake for fans of art, pop culture, and history. Dalí is one of the most complex and important artists of all time, and this extraordinary book contextualizes him and his effect on the art world far more meaningfully and engagingly than any other attempt. While there have been autobiographies of Dalí published as well as Salvador Dalí art books on the market (all of which have incurred high sales), this is the first book that offers a deep textual analysis of Dalí's life and enduring legacy with the addition of full-color art.

First book to explore, and capitalize on, Dalí's continued relevance: Dalí's relevance lives on today, evidenced by the popularity of Dalí museums (the Dalí Foundation reports that 1.4 million people visited the Dalí museums in 2017, with numbers increasing each year), and high price tags for original Dalí works (a triptych sold for $13 million in January 2020).

Christopher Heath Brown is a practicing oral and maxillofacial surgeon who has presented and published to both national and international audiences. He is one of the most prominent collectors of works by Salvador Dalí in the United States, and serves as the director of Brown Discoveries, a research institute focused on Renaissance, Surrealist, and Contemporary art. Together with Dr. Isbouts, Dr. Brown produced The Search for the Last Supper and The Search for the Mona Lisa for Public Television. Dr. Brown lives in Cornelius, North Carolina.

Jean-Pierre Isbouts is an art historian and a doctoral professor at Fielding Graduate University. He is the author of nine books, includingThe Biblical World, In the Footsteps of Jesus, and The Story of Christianity which have sold nearly 2 million copies, and together with Christopher Heath Brown, the coauthor of three books on Leonardo da Vinci, The da Vinci Legacy (Apollo Publishers, 2019), The Mona Lisa Myth, and Young Leonardo. Dr. Isbouts has been on numerous radio and TV shows and is the host of the TV series In Search of Masterpieces. He has directed several programs for Disney, ABC, Hallmark, and the History Channel, working with actors such as Leonard Nimoy, Charlton Heston, Dick van Dyke, and Morgan Freeman, and produced recordings with orchestras around the world. He was most recently featured on NBC's Today Show where he spoke about his discovery that a copy of Leonardo's Last Supper in a Belgian abbey was actually painted by Leonardo and his workshop. Dr. Isbouts lives in Santa Monica, California.