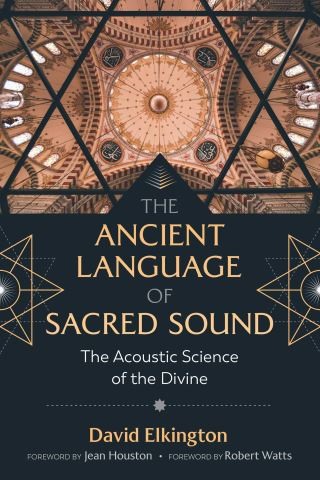 The Ancient Language of Sacred Sound

The Acoustic Science of the Divine

The Earth resonates at an extremely low frequency. Known as “the Schumann Resonance,” this natural rhythm of the Earth precisely corresponds with the human brain’s alpha wave frequencies--the frequency at which we enter into and come out of sleep as well as the frequency of deep meditation, inspiration, and problem solving. Sound experiments reveal that sacred sites and structures like stupas, pyramids, and cathedrals also resonate at these special frequencies when activated by chanting and singing. Did our ancestors build their sacred sites according to the rhythms of the Earth?

Exploring the acoustic connections between the Earth, the human brain, and sacred spaces, David Elkington shows how humanity maintained a direct line of communication with Mother Earth and the Divine through the construction of sacred sites, such as Stonehenge, Newgrange, Machu Picchu, Chartres Cathedral, and the pyramids of both Egypt and Mexico. He reveals how human writing in its original hieroglyphic form was a direct response to the divine sound patterns of sacred sites, showing how, for example, recognizable hieroglyphs appear in sand patterns when the sacred frequencies of the Great Pyramid are activated.

Looking at ancient hero legends--those about the bringers of important knowledge or language--Elkington explains how these myths form the source of ancient religion and have a unique mythological resonance, as do the sites associated with them. The author then reveals how religion, including Christianity, is an ancient language of acoustic science given expression by the world’s sacred sites and shows that power places played a profound role in the development of human civilization.

David Elkington: David Elkington is an academic and historian, specializing in Egyptology and Egypto-Palestinian links. Known for his work on the Jordan Lead Codices--the earliest known initiatory Christian documents--he is the coauthor of The Case for the Jordan Codices. He has lectured at Oxford and Cambridge Universities and appeared on many television programs, including Forbidden History. He lives in The Hague, Netherlands.